How David Resolved Conflict with the Philistines 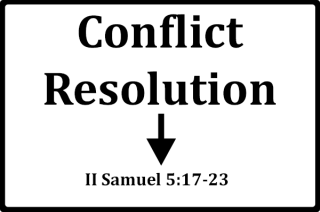 Recently, Lynn and the administrators of Spiritually Unequal Marriage taught a Spiritual Warfare Series. What a great job they did of teaching what Spiritual Warfare means and the tools we may use when in battle. Ironically, I was in my own intense battle at the same time, so I listened intently to what was being said. I knew I needed guidance in how to handle the situation.

I also remembered the stories of David’s battles with the Philistines. There was one that had been in my memory bank for years that had intrigued me. And so I re-visited that story in 11 Samuel 5:17-23 to see what new revelation I could gain, along with the teachings of the administrators.

(19) David inquired of the Lord, “Shall I go up?” “And the Lord said unto David, “Go up: for I will doubtless deliver the Philistines into thine hand.”

And so it was, just as David did, I inquired of the Lord about my situation, “Shall I go up?’  I heard the Lord say, “Yes, go up”

“Going up” meant having a heart-to-heart talk with a family member whom I had had an ongoing conflict with for several years.. So, I did my homework on how to handle conflict. Actually, I used a plan Dineen Miller introduced to our community years ago when confronting, called The TCWT Plan

Truth: Emotions and perception can cloud a situation. Ask God to reveal any truth in yourself that you need to know about the situation prior to confronting.

Conviction: Pray for the other person’s heart for conviction to the wrong, as well as any wrong doing in yourself that might have contributed to the problem.

Words: Be careful not to place blame and condemnation when confronting.

Timing : Ask God for the right time to discuss the matter, and then walk in confidence.

And so the time came when I felt the nudge to go up. My expectations were high for resolving this matter. However, the confrontation lasted less than 5 minutes because the other person wasn’t interested in discussing the situation at all.

I can’t say that the encounter was a lost cause. Even though the one I confronted wasn’t interested in resolving our ongoing problem, something inside of me changed---the tendency I had had for years of avoiding conflict was being stripped away from me. And perhaps that was why the Lord wanted me to “go up” and confront the situation with a face-to-face encounter. Anytime we walk in obedience, it changes us, whether it does the other person or not.

Back to David---Shortly after the battle David and the Israelites had with the Philistines in verse 19, the Philistines begin to wage another war. Once again David inquired of the Lord what to do.

(23) “Shall I go up?” David asked.”  And the Lord said, “Do not make a frontal assault. Circle around behind them and attack them opposite the balsam trees. (AKJV)

A healing had taken place inside of me when confronting my family member face-to-face, but I was still bothered by the fact that there had been no resolution.  That being said, like David, once again I inquired of the Lord, “Shall I go up?”

Suddenly, these two passages of scripture joined together became a rhema word to me.

One day soon I pray, I will share with you how the Lord resolved this conflict. Stay tuned!

What about you? Does it seem as though you are often in a battle concerning the same situation over and over again?  Perhaps, it is time to change the strategy plans in the battle.  I encourage you to inquire of the Lord what He wants you to do.