Changes and Transitions
Honoring Our Friends and Family on Memorial Day

Pre-positioned for Such a Time as This 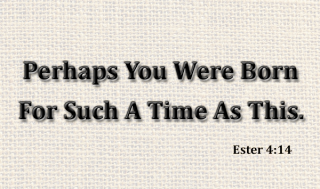 In my blog last week, Changes and Transitions, I outlined five stages I went through while making a major transition in my life.

In the Tired of Waiting Stage, I described the frustration I experienced as I waited for God’s promises to be fulfilled to bring the transition and its effects to a conclusion. It was here that my timing and God’s timing were not on the same timetable. Can you relate?

In fact, I actually prayed for weeks for God to give me permission to leave the journey that I knew He had placed me on. Finally, He answered by saying, “Who knows but that you have come to your royal position for such a time as this?” Where had I heard those words before? Oh yes, the book of Esther. (Esther 4:14)

“No Lord, I don’t want to be an Esther, just let me off this journey now!”

But, then He began to show me people in the Bible He had pre-positioned for such a time as this in history. Why?  To bring forth a great deliverance, not only for their families, but for other people also. In the midst of their designated position, they experienced discomfort, risk, ridicule, condemnation, rejection, and often times long periods of waiting that I had complained so much about.

Needless to say, I learned a lot from them. Let’s take a look at a few knowns and unknowns.

Esther: She became the wife of a pagan King. Her uncle and adopted father, Mordecai, discovered that Haman wanted all the Jews destroyed, and convinced Esther that she must go before the King and plead mercy to spare their lives.

Rahab: A heathen harlot who somehow understood God’s love for the Israelites. She had heard about God drying up the Red f Sea for the Israelites to cross,  and how the Egyptians then drowned in the sea. So, she hid the Israelite spies when they came into Jerusalem to check it out for their invasion. (Joshua 2)

Balaam’s Donkey: Are you ready for this one? God used a donkey to stop Balaam from going the wrong way, with Balaam kicking the donkey all the way.  Now we might scoff at the thought of God using a donkey, but who is to say that the donkey wasn't brought into a place of royalty for such a time as this. (Numbers 22:21)

Jehaziel: The army was coming against the Israelites. Jehoshaphat called a fast to pray for directions. Jahaziel, a prophet came forth,  “Go on out into the battle tomorrow and just sing praises.”  When his prophetic word was followed, the invading army got so confused, they killed themselves with their own swords. (11 Chronicles 20:13-30)

Anna:   Anna was a widow and prophetess. She had dedicated herself wholly to the Lord, and never left the temple in Jerusalem and spent her time worshiping, fasting, and praying. (Luke 2:36-38)

My friends, we serve an awesome God. What an honor to include us ordinary people in a place of royalty to bring about His Kingdom rule. Our names were written in the book before the foundation of the earth with a plan for our lives. When the time came, He pre-positioned us to partner with Him to bring about a deliverance for our families and for many more.

What a privilege to be among the likes of Esther, Daniel, Joseph, Abraham, Paul for a specific job to be fulfilled.

My friends, where have you been pre-positioned?  When you know God has called you, it enables you to overcome each obstacle as it arises.