Do You Trust Me?
Changes and Transitions

Love Can Build a Bridge - via 1 Corinthians 13 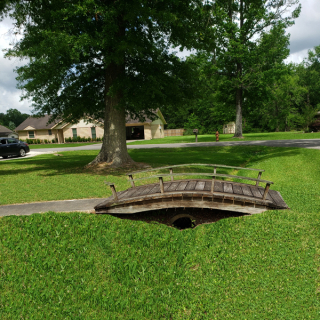 On April 30, 2022, Naomi Judd’s daughters, Wynona and Ashley, announced that their mother had lost her life to mental illness. Naomi had always been an outspoken advocate for mental health, as she discussed her own battle with depression over the years.

After a long absence of singing together, a couple of weeks prior to her death, The Judds sang, “Love Can Build a Bridge,” at The Country Music Awards. She looked on top of the world, but only a few days later, she was gone.

Actually, Naomi co-wrote that song, along with John Barlow Jarvis, and Paul Overstreet. The song is about the importance of always standing together.

I listened to that song several times after the announcement of Naomi’s death; I just couldn’t get the words of the song out of my mind, particularly that word "bridge."

While I was immersed in my thoughts on that song, I passed by my friend Shari's house.  Years ago, she and her husband had built a wooden bridge in front of their home. It serves as a crosswalk for people to be able to walk over it to get from the street and over the ditch so they can enter their yard.  No doubt, they had a plan in mind before it was built, and they knew the specific kind of wood to buy to serve its purpose. (Shari's bridge is pictured in image)

And then it hit me why the word bridge was standing out to me - - love can build a bridge for the purpose and importance of humanity crossing over barriers to stand together. But the question is how do we build a love bridge - something that you can't see.

It suddenly dawned on me that Paul gave us the blueprints of how to build that love bridge in 1 Corinthians 13:4-8.

A search of the Bible will reveal many more scriptures instructing us to extend love to our fellowman.

My friends, as sad as it is for Naomi and her family, it seems today that people everywhere are going through so many trials and heartaches that are not as widely known as hers were, but they are walking among us daily. Some may ask for help, while others, for whatever reason, may not.

May we be more discerning and attentive to the needs of those around us and build a love bridge, according to 1 Corinthians 13, that crosses over the ditch (any barrier) to enter hearts, homes, communities, and nations to help those suffering.