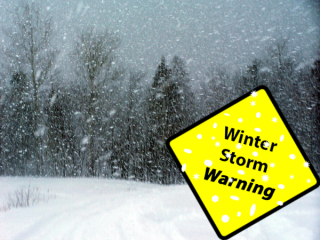 Join me today, as I describe another winter season I experienced. See if you can relate.

The days are short; the nights are long. The clock on the nightstand records 2 A.M. followed by 3 A.M., then 4, 5, and 6. I lay awake shivering and sobbing. The cold shivering night finally gives way to morning. I thought that perhaps the glimpse of the sun would bring warmth to the coldness that I felt the night before, but it was hidden in a gray fog, not bringing forth any warmth of sunlight at all. “How long, Lord, how long, is the cold winter going to last?”

Some days and nights were not as cold as others, as life continued with some happy times as well. However, my inner forecast always warned: “Be on the alert, there could be another storm brewing.”  When questions of the longevity of the season twirled in my mind, I was jolted back to reality with:

I am shuffling through a winter season, and
I might as well button up, zip up, and embrace it until
God brings it to a conclusion in His appointed time.

Sound familiar? This type of spiritual winter is different than the cold heart winter. I believe we can control the length of time our cold heart season lasts by disciplining ourselves to study the word, forgive all offences, debunk the lies of Satan, and yield to the emotional and spiritual healing the Lord wants to provide for us.

But, I am going to make a bold statement and say that when we are experiencing God’s Appointed Time Winter, we have no control over how long it will last - - that is "If we accept God's invitation to partner with Him in bringing about His purpose." This appointed time could last one month, six months, or years.

Why can’t we control the time period? I believe it’s because this season usually involves other people and circumstances. Think of Joshua and Caleb. A piece of land had been promised them on the other side of the Jordan River. However, they had to wander around in the wilderness for 40 years with unbelievers, but they didn’t give up, and received God’s promise.

Unlike Joshua and Caleb, there was a time when it seemed as though everything was falling apart in my life and I wanted to give up. After weeks of a gigantic pity party with God, I heard Him say to me as Mordecai said to Esther, “Who is to say that you have not been brought into the Kingdom for such a time as this.” (Esther 4:14)

I was then reminded of a prophetic word that had been spoken over me years before:

“For you see the changing of the season in the natural and how it affects your natural man, do you think that its’ a strange thing that my plan will affect your spiritual man? So yield even to me as my season changes for you, for as they’re changing from hot to cold, that’s the way it’s going to be. But, the cold only lasts for a short season, and then springtime comes again. So yield to this time, so that you might fit in when it changes again.”

So, I made a decision to embrace the cold, and wait for His appointed time for the season to end, whenever that might be. While waiting, I kind of noticed He was also doing a little shaking and burning away impurities within me. (UGH!)

My friends, I believe God invites us to partner with Him to fulfill a special purpose, and it often takes time for the fullness of it to manifest when it involves other people.  It can be very frustrating during the wait when we feel as though we are not seeing God in action. But, remember the story of Esther? God’s name is not mentioned in the entire book of Esther, but He was behind the scenes quietly lining people and circumstances up for just the right moment to accomplish His plan for saving the Jews.

In your story He has YOU.  “I don’t have what it takes,” you tell yourself, and you feel like retrieving.

"Don't give up, but button up, zip up, and embrace the cold.
Who knows - - God might be about to turn the pages
for the concluding episode of your story, and it will be Springtime once again.”

“For the vision is yet for the appointed time;
It hastens toward the goal and it will not fail.
Though it tarries, wait for it;
For it will certainly come, it will not delay." (Habakkak 2:3)