A Trail of Grace: Sufficient Grace 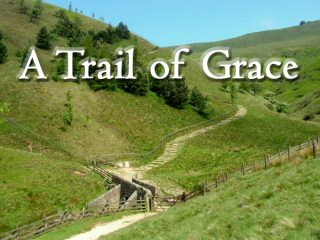 I am continuing our series on Grace - - God’s unmerited favor. We can’t earn it; it’s a free gift.

Last week, we started down a Trail of Grace with Jacob, known as the master of deception. He had just deceived his aging father and stolen The Blessing that was intended for his brother, Esau. Esau threatened to kill him. While on the run to his Uncle Laban's house to get away from Esau, God met him at a Certain Place, and Jacob had a Conversion experience.

Here’s a young man who could not be more off course in terms of God’s plan for his life. But, God was waiting for Jacob out there in the desert to correct his course. That's Grace.

Today, we are going to continue down our Trail of Grace with Jacob as he travels the remaining several hundred miles to Uncle Laban's house. I can just see him singing praises to God along the trail now that he was saved. But----it wasn't long before he got a dose of his own medicine.

Jacob realized God had kept the promise made to him at the time of his conversion. “I am with you and I will bring you back to this land. I will not leave you until I have done what I have promised to you.” (Genesis 28:15)

Grace didn’t bail out on Jacob during those twenty years. This reminds me how Jesus responded to the Apostle Paul's third plea to “take this from me” concerning his thorn in the flesh. (2 Cor. 12:9-10.)

“My grace is sufficient for you,
for My strength is made perfect in weakness.”

How well I personally remembering hearing those words years ago. I won’t go into detail, but I’ve had this on-going situation in my life for years. Many times I prayed,  “Please take this from me, Lord,” but the event kept playing out year-after-year. Finally one night, at a very low point, I heard the words of an old chorus:

And with that, a peace settled deep within me, and I went on with life. But, as the years continued to roll by, I occasionally go back to that place and cry out again, “How long, Lord, how long? Isn’t it time for You to bring this all to a conclusion as You promised You would?”

This past week, I was alone in a motel for a pre-planned quite time with the Lord, and it seemed as though He  “explained” a few things to me:

"You see, Martha, there was a certain place Jacob’s conversion happened. There was also a specific time in history I was going to use him to bring about my plan that had been proclaimed to his grandfather and father, Abraham and Isaac. The appointed time COULDN’T HAPPEN ANY SOONER; IT WAS INTENDED FOR A CERTAIN PLACE AND SPECIFIC TIME IN HISTORY. As you know, it was through Jacob's lineage that you now have Me as your Savior."

And then He talked to me about my situation:

My friends, I believe there is a person in each family who, like Esther, has been brought into the Kingdom for such a time as this.   Are you willing to be that one to change the course of history for you and your family?

Back to Jacob - - after twenty years, God gave Jacob permission to return to his native land. Next week, we will see what happens when it's time to meet Esau.