The Shaking Means Restoration Is Near
Kingdom LIFE! Are You Swept Up In THIS Common Demonic Deception?

The Kingdom of God: Salvation Plus More 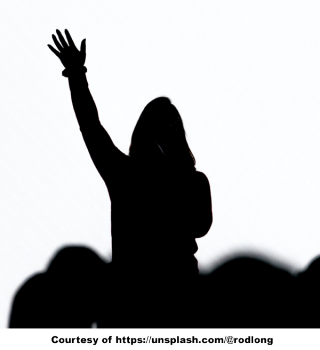 “There are three people here tonight who need Jesus,” the minister had said at the close of his sermon. Immediately, two people raised their hands, and what followed next was an eerie silence that swept over the congregation that seemed as long as eternity.

Tightly clutching the pew in front of me, I opened my eyes to scan the worshippers while screaming within, “Where is that other person? Speak up; it’s time to go home!”

The silence continued to linger heavily over the large sanctuary. And then it happened. The gentle convicting power of the Holy Spirit nudged me, and I knew my time of running from the Lord was up. And with that, I broke the long silence that had prevailed by raising my hand and confessing, “I am that other person who needs Jesus tonight.”  The minister responded, “I knew you were, Martha; that is why I waited so long.”

Say what? Had the minister and the Holy Spirit been co-operating together to reel me in from years of making excuses as to why I wasn’t ready to accept the Lord?  Well, obviously!

You see, I had been brought up in a very strict denominational church where the salvation message was a lot of dos and don’ts.  Salvation wasn’t very appealing to me. It appeared as though I would have to give up everything fun, so I wasn’t interested. But, Pastor Edgar Bethany in Atlanta, Georgia, had made an impact on me. Gone were the type of sermons from my past that had condemned me to hell. What I really liked about him was the way he closed each sermon, “Jesus loves you and I do, too. The Bible says, ‘Draw near to God, and He will draw near to you.’”  (James 4:8 NKJV)

So, in those final moments, a gentle voice within me seemed to be saying, “Just draw near to Me; I will help you straighten out all the dos and don’ts that have plagued you for so long. I want a relationship with you.”

And with that salvation experience behind me, I left church that night eager to start my relationship with Jesus. I couldn’t get enough of God’s Word. I often visualized myself as being on the hillside, seated among the multitudes, spell-bound by His teachings. Or walking along the seashore with Jesus hand-in-hand, growing my relationship with Him.

All of which adds up to its meaning as: The Rule of God

Where there was sickness-----Jesus healed.

When the tormented and deranged came to Him-----Jesus cast out demons.

When more wine was needed for a wedding-----Jesus turned the water into wine.

When storms came up-----Jesus rebuked them.

When death occurred-----Jesus raised the dead.

Whenever Jesus went, His power was pushing back Satan’s power, and He was RULING  over areas that Satan was trying to steal, kill, and destroy in the lives of  God’s people.

For clarification, there is The Kingdom of God the Bible talks about as a future event when Satan will be bound. (Matthew 26:29; Revelation 20:4-6)  But, in our present time, Jesus calls us to partner with Him to rule and reign NOW on this earth to destroy the work s of the devil.

What would that look for us:

that is the Kingdom of God Ruling, which makes us Kingdom People here on earth.

Back to my own salvation experience:  When I left church that night, I entered into a peace I had never had before, even though I had grown up in church. How well I recall when I was a teenager riding home from church in the back seat of my daddy’s car silently praying, “Lord, please don’t let my daddy have a wreck; I am not saved, and I don’t want to go to hell.”

So believe me when I say that the greatest gift Jesus has given us is eternal life. But, I have to believe that He wants us to have Salvation Plus More - -life and life more abundantly while here on this earth, and that comes by partnering with Him in destroying the works of the devil in our lives, family, church, and our nation.

Lynn wrote two books, Marching Around Jericho and Kingdom Conversations, as well as uses this website to teach about The Kingdom and how to live victoriously through Christ.

Let's join with her and bring it on!  More on this subject next week.

What are your thoughts on The Kingdom of God?