Society and The Church: Part 2
Help, I've Been Shaken and Can't Get UP!

Society and The Church: Part 3 - What is a Living Sacrifice? 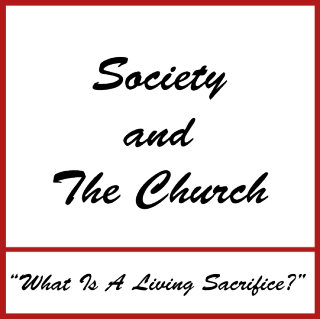 For the past two weeks, we have been on a journey to find out the effects Society and The Church had on one another during a thirty year period between the 1960’s and 1990’s. You can read Part 1 here and Part 2 here.

Last week, we saw that Society was re-shaped and shaken with major cultural changes in the ‘60’s. The Church adjusted its beliefs and values to the ways of Society and historians recorded a decline in attendance and membership during the '60's.

If space permitted, I could go on describing major cultural changes that occurred in the following decades, along with statistics showing how the Church aligned itself to the mood swings of an ever-changing Society. In all fairness to The Church, two major pluses occurred in the '70's and '80's: (1) The Catholic Charismatic Renewal that brought a stamped from the Baptists, Methodists, and Episcopalians for the Baptism of the Holy Spirit that had previously been associated only with the Pentecostal Churches (2) The Fall of the Berlin Wall, allowing the Word of God to spread throughout Eastern Europe.

I want to draw your attention to our topic today and begin by asking the question “What is the answer to this up-and-down relationship between Society and The Church? I believe the answer to that is partly due to a sermon my former pastor, the late David Berkheimer, preached in 1993 from Romans 12:1 and Matthew 10. As I’ve pointed out, it triggered my interest in doing this research.

Quote: In revivals of the past with Charles Finney and John Wesley, Society was always changed. When these men left town after a revival, many of the bars closed, and the town would change. When The Church moved, people were changed; Society was changed. There was a move of God across America years ago and new churches were established on every corner. That’s why America was strong; that’s why the morals of America were strong; churches stood up for righteousness and the church affected society.

What’s gone wrong today?  I believe we have not allowed our bodies to become a living sacrifice, as Romans 12:1 says:

I beseech you therefore, brethren, by the mercies of God,
that you present your bodies a living sacrifice,
holy, acceptable unto God, which is your reasonable service.

Matthew 10 gives a description of what a living sacrifice for the glory of God is.

It’s not enough to get the sin out of our lives; it’s not enough to think right. These things  don’t change people around us. Our body has not served God well, nor has it served the church well until it has learned to put its self-interest on the back burner and put somebody else’s interest and the purpose of God on the front burner and say, “This is what I’m going to do in my life. I’m going to serve others, even when it means not doing something I want to do. I will preach God’s word even if it cost my life, even if it touches my finances, even if it messes up my plans and my family - I will serve Him no matter what it costs.”

That is a living sacrifice for the Glory of God!
(end of sermon)

On a personal note, I was the so-called “good Christian:” I showed up every time the doors of the church opened, paid my tithes, took notes on the sermon, and carried a covered dish to every function. Society had absolutely no effect on me until--------

Until the day, God began calling me to make a transition in my life that would take me from a teaching career I loved, as well as a comfortable place financially. I argued with Him that it was the wrong time.  “Ask me again in a couple of years, and I will obey.”

I found out God wasn’t interested in cutting a deal with me. I was brought to the Y in the road, and I had to make a choice.  It was then I realized for the first time in my Christian walk how much society had a hold on me, as well as family relationships, and financial security.

Because of this life changing experience, I am convinced that:

Our journey into this realm of being a living sacrifice for Christ may not be as descriptive as Matthew 10, and will be different for each person, but the only thing that changes people around us is when we become sacrifices for Jesus Christ and serve Him in a sacrificial way ----

no matter what is going on in  Society around us,
or what decade we may live in.