Society and The Church: Part 2 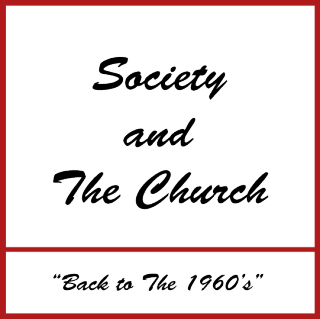 Last week, I started writing a series of posts on a research project I did a few years ago to find out the effects of Society on The Church in America, as well as the effects The Church had on Society. You can read Part 1 here.

The research was prompted by a statement by my former pastor, the late David Berkheimer, Community Church, Orange, Texas.

“Our society has affected the church the last three decades rather than the church affecting society. What’s going on? I believe we are not allowing our bodies to become a living sacrifice.” (March, 1993)

Like most Americans living in the ‘60’s, I remember where I was, and what I was doing when I heard the tragic news of November 22, 1963. I was in my dormitory room at Andrew College, Cuthbert, Georgia, getting ready for my next class. All up and down the hall, radios were blaring with the pop music of our day. All of a sudden the music was interrupted with a news bulletin:

“We regret to inform you, but the
President of the United States, John F. Kennedy, has been shot.”

All the girls stopped what they were doing, and ran to the TV in the lobby. We had read in our history books about The Assassination of President Lincoln in 1895, but we certainly never imagined we would see the same thing happening in our life-time. Though we were young, and probably not very political minded, we sensed this was a great tragedy for our country.

Another event that changed the course of our American Society was Madalyn O’Hair’s march on Capitol Hill when she convinced Congress to pass a law June 17, 1963 declaring-----

Prayer Unconstitutional in the Public School Systems of America.

It wasn’t until I entered the teaching profession myself that I realized the first 10 minutes of the school day could not be spent in the same manner I had grown accustomed to growing up. Before class began, our teachers read us a devotion, had prayer, and led is in reciting the Pledge of Allegiance to the American Flag. Suddenly, that all stopped.

Other major events occurring in the ‘60’s were:

Historians and sociologists have accessed the decade of the ‘60’s as a time when our nation changed - a change that re-shaped and shook our nation.

“Nowhere was the travail of the ‘60’s more apparent than in The Church.
The country was caught up in a series of social and cultural shifts
that altered  the place of religion in America.”
(Wade Clark Roof - American Mainline Religion)

In the 1950’s, church membership was up and interest in morality and religion was high. Polls showed that 49% of all Americans attended church on a weekly basis and 73% of all Americans claimed membership in a church. Time Magazine reported in 1955 that “Everybody knows church life is booming in the United States, and there are plenty statistics to prove it. A spiritual revival is taking place.”

But, the ‘60’s marked a turning point in American religious life. The polls began to show a decline in church attendance.  It moved away from the “religious rally” of the 50’s. Studies show that it was the youth who left the church mainly because they were dissatisfied with churches that adjusted to the culture and who could not perform their essential business of dispensing of religion because-----

the church’s beliefs and values had changed in line with society.  (Wade Roof)

Fast forward to 1994:   “Like a frog in the kettle, The Church has gradually adjusted to the moral temperature of its surroundings. Those who call themselves Christians seem to have about as many moral sins as those outside of The Church. We have drifted so far that, like Lot in Sodom, we have lost the respect of Society to the point where our influence is laughed at. While trying to clean out the world’s house, our own house has become filthy and in need of repair. While judging others, we have failed to judge ourselves. While criticizing the world, we have become dangerously like it. The only way for the church to influence America for God is to let God change us. We must never forget that moral power and spiritual force are mightier than politics.” (David Berkheimer, 1994)

Join me next week, and let’s see if we can determine "What is a Living Sacrifice For God," according to  Matthew 10.

Do you have memories from this time period in history of Society and The Church and in what ways you were affected?