God Sent Me Morse Code! For Real. AND IT'S FOR YOU TOO!
I DARED To Ask God THE "SCARIEST QUESTION."

Time For War! Pick Up Your Weapons! 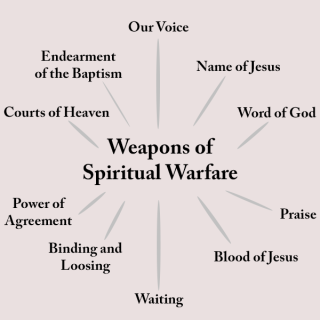 For the last couple of weeks, we have been on a journey together – the same journey the Israelites took on their way to The Promised Land.

We re-visited our time spent in The Wilderness – a place of testing our faith. It was there that we came into an intimate relationship with our Father and established our identity in Him.

Next, we crossed The Jordan River with the new generation where we made a stop at Gilgal to take care of  three things:

1.Recalled times of God’s faithfulness to us

2, Circumcision of our hearts took place

3. We remembered the Passover by taking Communion

Time for War! Get Your Weapons Ready!

I can just sense Joshua's excitement as he was about to issue his mighty warriors the most common weapons used in that day: clubs, sickle sword, bow and arrows, and a sling and stone.

But, wait! The Lord was speaking to Joshua ----

Have seven priests carry trumpets of rams’ horns in front of the ark. On the seventh day, march around the city seven times, with the priests blowing the trumpets. When you hear them sound a long blast on the trumpets, have the whole army give a loud shout; then the wall of the city will collapse and the army will go up, everyone straight in.”  (Joshua 6:4-5)

Can't you hear Joshua saying, “You have got to be kidding me; no arrows, guns, or swords?”  But, they obeyed the Lord and on the seventh day, the walls of Jericho did, indeed, come tumbling down.

Fast forward to our day and time. What do we use to fight our spiritual battles?  That is what I want to share with you today. These weapons literally open the doors to Kingdom Living.

1. Our Voice: It was 2 AM in Texas as I was reading Chapter 12 in Marching Around Jericho, and I had a Holy Ghost fit. God doesn’t look at the clock when He wants to impart a truth to us.

“Satan is determined to silence humanity. Do you know why? Our voice is powerful! He knows when a child of God discovers who they are and whose they are, then connects their identity with their voice, his defeat is certain.”

Aha! The moment of truth was connected for me. You see, for years I had had an identity problem, but my time in The Wilderness took care of that – I now knew who I was and whose I was. However, having lost my identity for so long, I was having a hard time regaining the power of my voice that had been pushed down over the years.

I realized that night that there is power in my voice because God put it there!  With the assurance there was power in my voice, I began studying once again weapons that I had put on the shelf, thinking I was too weak to use them.

2. The Name of Jesus: Philippians 2:9-11 tells us that God gave Jesus a name which is above every name: That at the name of Jesus every knee should bow, of things in heaven and things in earth, and things under the earth.”  There you have it again---when our voice mentions Jesus’ name in a battle, the demons have to flee.  Confidence in my voice was being renewed.

3. The Word of God: “For it is written,” Jesus spoke the Word of God to the old devil when He was being tempted in The Wilderness.  Jesus wasn’t screaming; He was just speaking the word, and the devil high-tailed it out of there.

4. Praise: Remember the story of Paul and Silas locked up in prison?  As they prayed and sang praises, the doors of the prison were opened, and they escaped out of the hands of the enemy. (Acts 16:25)

5. The Power of Agreement: Numbers 14 is a perfect example of two in agreement. Joshua and Caleb agreed they could take The Promised Land. The ten spies who agreed in disbelief “died by the plaque before the Lord,” Numbers 14:37.

6. The Courts of Heaven: Lynn writes much about this in March Around Jericho, and I have to confess, this is a new weapon for me. I know there is coming a time when the Holy Spirit is going to give me that nudge and say, “Okay, Martha, it is time to go to the Courts of Heaven.”

7. Waiting: Alllllll of us have much experience in using this weapon. Think about this scripture: Isaiah 40:31: But those who wait on the Lord shall new their strength; they shall mount up with wings like eagles, They shall run and not be weary, They shall walk and not faint. I think we give the old devil a black eye when we wait, and not fall prey to his schemes of weariness that make us give up.

Other weapons that much has been written about include:

8. The Blood of Jesus

9. The power enduement of the Baptism

What about you?  Are you ready to pick up your weapon and go to war? If so, see you next week as we step foot in The Promised land and begin to possess our inheritance.