I DARED To Ask God THE "SCARIEST QUESTION."
I Bet You Didn't Know This Truth About America!

Possess the Land: One Lot at a Time 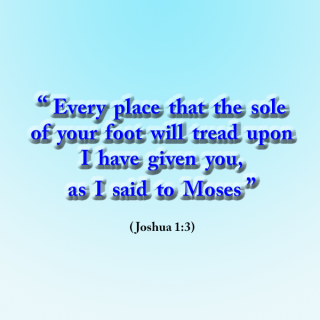 “Rise up!  I have set the land before you.  I yoke myself up with you, and the way that you go, I’ll be there to hold you up.  You are free!”

That prophetic word is how I began this series on Possess the Land. I have written briefly of my experience, and compared it to the Israelites’ journey of leaving Egypt on their way to Canaan. When I say “brief,” believe me, journals are filled with details of a very long journey that took  me to places I never dreamed of going.

I conclude the series today. If you missed the previous posts, you might want to look back to their beginning. Very likely, you will see similarities of your own journey into The Promised Land.

Possess the Land: The Wilderness Years

Crossing the Jordan into Gilgal

Time For War! Pick Up Your Weapons!

We left our journey last week with the realization that God has given us weapons for fighting our spiritual battles. Warriors, are you ready to charge into the land God has given you? I feel a Holy Ghost adrenaline flowing within me to possess the land before me.

The question is, “Where do we start possessing?” For the answer to that, let’s go to God’s instructions to Joshua, “Every place that the sole of your foot will tread upon I have given you, as I said to Moses. (Joshua 1:3 NKJV)

Geographically speaking, that is a massive piece of real estate! Obviously, we are not out to possess a piece of real estate as the Israelite were, but we are out to possess what Jesus said is ours in John 10:10: “The thief cometh not, but for to steal, and to kill, and to destroy: I am come that they might have life, and that they might have it more abundantly.”

Abundant to me means health, peace, love, joy, salvation, secured finances and deliverance. But, just as Jesus said, we do have an enemy that goes about trying to steal, kill, and destroy that abundant life. And one day, we wake up to the fact that he has stolen more than we realize.

Let me explain what I mean by that. For years, I taught a class at my church called “Healing of Past Hurts,” based on steps in The Grieving Process – Denial, Bargaining, Emotions, Forgiveness, Acceptance. When we would get to the step on Emotions, I would encourage the class to get to the root of their most common emotional response. Most of the time, their emotional response would date back many years to a hurt that had not been healed, and work its way up to their current loss. When they realized this, they would say, “I have many losses and hurts that have not been healed, and I have been responding the same negative way for years.”

And with that realization, they suddenly would feel overwhelmed, and would question me, “Where do I start taking back what the enemy has stolen from me?”

I would always refer them back to what God said to Moses when the Israelites reached the Jordan River and were about to cross into Canaan.  “Divide up the land by lot according to the size of your clans: Large clans will get large tracts of land, small clans will get smaller tracts of land. However the lot falls, that’s it. Divide it up according to your ancestral tribes. (Numbers 33:54 The Message)

Lot is the key word in that scripture. I don’t want to take that scripture out of context, but I want to explain it from my own personal view, and let you decide for yourself.

1. Each of us have different lots to possess according to our life experiences. For some, many lots have been stolen.

2. Trying to take all of these lots back at once would be too overwhelming; the enemy is not going to give up easily. Trying to dispose of them all at once would cause us to spread ourselves too thin.

3. From my own personal experience, one lot at a time has also given me the opportunity to learn something new about God’s character on each lot.

It is my belief that The Holy Spirit tells us which lot to take and also when His appointed time is to possess it. He has been preparing us for this moment, and knows when we are ready to possess a specific lot, as well as when He will receive all the glory. He also knows the assignment He has waiting just for us to go forth and help others possess their lot.”

The story of Joshua and the Israelites' conquest possessing Canaan fascinates me. I especially love how Caleb, at the age of 85, stood up and said, “Give me this mountain!” (Joshua 14:12)

What did the Israelites have to do to possess the land? Just show up and partner with God - He did the rest. Likewise for us!

And so, my friends, I pray these posts have encouraged you also to-----

“Rise up!  I have set the land before you.

I yoke myself up with you, and the way that you go, I’ll be there to hold you up.