Possess the Land: The Wilderness Years 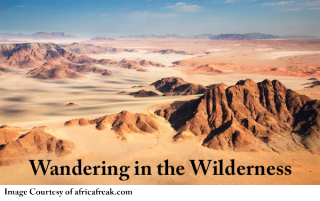 “Rise up!  I have set the land before you.  I yoke myself up with you, and the way that you go, I’ll be there to hold you up.  You are free!”

Just as Elizabeth felt something leap inside of her when told that she would have a baby in her old age, something leaped inside me when a prophet spoke those words to me.

For years, I had been enslaved to hurts in my life and had dreams of walking in freedom. Physical problems, family relationships, stressed over unsaved loved ones, and finances were keeping me in bondage. I also had a deep yearning to become all God created me to be, yet something was missing. I knew all these desires lined up with God’s word, but it seemed as though my prayers were bouncing up against a brick wall as my enslavement continued year-after-year.

At last, it appeared as though it was all coming to an end with God’s instruction to “Rise up; the land was before me.”  Thus, I set out to possess my inheritance by proclaiming and declaring God’s promises to me every day. The joy that the manifestation of those desires was right at my fingertips reminded me of harvest time on my daddy’s farm. How well I recall what he would say when it was time for him to gather his crops. “Do not make any plans with me for the next few weeks; the crops are ready to be harvested, and if I don’t gather the crops now, all the seeds I have planted will be wasted. I will be working in the fields from sunup to sundown until the crops are gathered.”

And that’s how I saw the prophetic words the prophet had spoken to me. Don’t be wasting time going here and yonder. Any moment now, those desires are going to become a reality and manifest themselves in your life.  Be ready!

However, much to my surprise, instead of things getting better, they got worse. I thought I was going to have an instant deliverance and live happily ever after. Often I’d cry out, “Where are you going Lord? Lay a quick healing and deliverance on me, and let’s get out of here!”

Somehow it began to dawn on me that He was not taking me on a direct route to deliverance; He was taking a detour. That little detour landed me smack dab in the middle of The Wilderness, one of the most difficult times in my life.

Needless to say, I didn’t know anything about The Wilderness, except what I had read in the Old Testament story of the Israelites and how their journey lasted 40 years. I shuddered to think that only two actually made it out because of their unbelief and complaining. I concluded that was the story of stiff-necked, hard-headed Israelites; it didn’t apply to me.  There was nothing unrighteous in my heart!!

Thankfully, one thing I did possess in The Wilderness was a new identity and that identity was a knowing of who I was in Jesus Christ. In her book, Marching Around Jericho, Lynn devotes a chapter to the importance of knowing our Identity in Christ and His purpose for us. (pg. 57)

It appears as though a trip through The Wilderness cannot be avoided for any of us who pursue the heart of God. The journey of the Israelites fascinates me. I believe it is a story that applies to all people who are serious about having their hurts healed, their dreams fulfilled, and being a vessel in God’s hands to bring light into a fallen world.

In fact the Bible says: Now these things happened to them as examples, and they were written as a warning to us, on whom the ends of the ages have come. So, whoever thinks he stands must be careful not to fall. (1 Corinthians 10:11-12 HCSB)

For the next few posts, I would like to share some thoughts with you on Possessing the Land - - that land on the other side of The Jordan River that the new generation of Israelites came to dwell in– the land of the supernatural!

In the comments, how about sharing your wilderness story.